Teen Hearing Loss May Be on the Rise, According to Survey 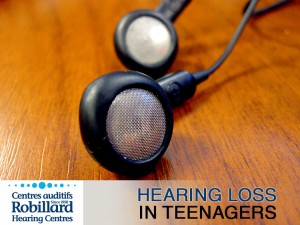 Remember when your parents yelled at you to “turn that racket down?”

It turns out that as it relates to hearing health, that was some sound advice.

A recent survey of teenagers commissioned by hearing aid manufacturer Siemens found that nearly half of the 500 American teens surveyed showed signs of potential hearing loss.

That’s a pretty alarming figure, but not altogether surprising. Consider the rise of portable digital media players, and the percentage of people — never mind just teens — that walk around with ear buds blasting music all day. It could possibly be the case that these, and other environmental noise exposure, are playing a role in increasing rates of noise-induced hearing loss.

Without generalizing the entire group, it’s probably fair to say that teens are generally not known for their cautious approach to life, or ability to consider the long-term implications of their behavior.

The authors of the study wanted to get a sense of whether teens have a sense of the fact that prolonged exposure to loud noise can be harmful. So the survey asked teens whether their teachers or parents would tell them to turn the volume down, wear protective gear or stop the activity if they knew how loud the music they were listening to was. 78% of teens responded with a “yes.”

This suggests that in the majority of cases, teens understand that listening to music too loudly can be a potentially harmful activity. But knowing that something can have negative effects and actually changing that behaviour are two different things… and the way the question is phrased suggests that teens are not worried enough about potentially damaging their hearing to actually change their behaviour.

Some of the indicators or evidence of damaged hearing include:

How to Mitigate the Risks

The study suggests several courses of action to help mitigate the risks of hearing loss in teens:

Education & Peer Pressure: Many teens will always be predisposed to be a bit reckless when it comes to their health, but constant messaging about the link between prolonged loud noise exposure and hearing loss can’t hurt. It doesn’t even need to be from an adult; the study suggests that teens can warn their friends when they are putting their hearing at risk.
Replacing Earbuds with Headphones: Standard over-ear headphones keep some of the direct sound out of the ears as music is pumped through them.
Protection: Wearing earplugs when carrying out loud activities like mowing the lawn, attending concerts or jamming at band practice.